What is an I-601A Provisional Waiver? 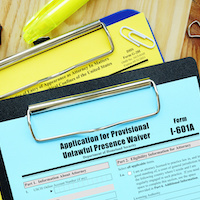 What is unlawful entry to the United States?

How does an I-601 Provisional Waiver work?

What are the requirements for a Provisional Waiver?

There must be a showing of “extreme hardship” in order to qualify for a provisional waiver. Our immigration lawyer sits down with our clients and drafts a plan on the best arguments to make in the hopes of attaining a provisional waiver. Although nothing in life is guaranteed, we take the time to obtain the facts, and from those facts, make a compelling argument to justify the waiver. For example, from the facts, we make all efforts to show that the United States citizen spouse or permanent resident would suffer “extreme hardship” if the undocumented immigrant would leave the United States due to the 3 or 10-year bar depending on the unlawful presence period which is at issue.

What is Extreme Hardship?

Extreme hardship is complex enough to merit its own article at a later date. But for the purposes of this article, extreme hardship means more than a showing of financial hardship, which makes extreme hardship a very high standard. When and if the provisional waiver is approved, then the undocumented immigrant must leave the United States and complete an interview abroad, likely at a U.S. embassy. This process is known as consular processing. After the interview (consular processing), the immigration officer would make a final determination as to whether the undocumented immigrant qualifies for a Visa, and if the answer from the immigration officer’s decision is positive, then the immigration officer would issue a Visa to the undocumented immigrant, whom now may enter the United States lawfully. It is important to note that once the re-entry to the United States has occurred, the entry is now lawful, which is the ”forgiveness,” of the initial unlawful entry. Thus, the purpose of a Provisional Waiver, commonly known as an I-601A waiver.

Should I hire an Immigration Lawyer to apply for the (I-601A) Provisional Waiver?

Our Immigration Lawyer is DIFFERENT than the rest!

Just this week, we had to unfortunately deny legal representation to three couples that we believed would not qualify for an I-601A provisional waiver as these couples would only be able to show a financial hardship, which for immigration law purposes, is not sufficient to meet the standard of Extreme Hardship. Attorney Oscar felt terrible when he had to be honest with these couples by telling them that in his professional immigration lawyer’s opinion, the chances of qualifying were very low. However, Oscar asked different questions and spent over an hour with each couple trying to find ways to meet the extreme hardship standard. Although we understand that financial hardship is truly extreme to our lives, unfortunately, the United States immigration laws that decide whether to grant an I-601A provisional waiver do not believe that mere financial hardship meets the extreme hardship standard.

If you want more information on provisional waivers, or if you have any questions on how we process I-601A applications, please contact our Los Angeles immigration lawyer, Attorney Oscar, today at 626-514-1000, and please ask for the Immigration department. We provide a free immigration consultation at any of our immigration law offices in West Covina, Ontario, or Monrovia. We keep it honest, direct, and help you understand how and why the immigration laws apply.

By Oscar A. Ischiu, Esq. | Posted on June 10, 2022
Personal Injury
Immigration Law
Criminal Defense
Schedule Your Free Consultation
Your first step to immediate assistance and resolving your legal issue is a consultation with our firm where you can tell us about your needs. We take the time to listen and let you know how we can help.
Get Help Now, Call Us Today